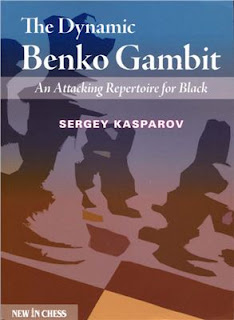 As a scientist gathers information about a certain subject for his research, a chess player studying a new opening wants to be aware of all previously published information. Recently I read another book on the Benkö Gambit which definitely helps to form a more objective opinion about this opening.
The author of The Dynamic Benkö Gambit is the well-known Belarusian GM Sergey Kasparov who has almost made a living from playing the Benkö as a frequent competitor on the open tournament circuit. In such events one usually doesn’t gain that much from playing in an absolute correct style – you need to take risks in order to succeed. His choice of the Benkö is explained in the introduction of the book as follows:

Even if the Benkö Gambit is only half correct, does this strongly distinguish it from, for example, the Grünfeld or Old Indian Defences? These things are quite relative. Of course, it’s extremely risky to use this opening against an opponent with an Elo above 2700. However, hardly anyone of us participates in super tournaments, do we? Opponents above 2600 are dangerous, but they can’t always prove flaws in gambits either – to say nothing about amateurs.

This practical attitude has served him pretty well throughout his career, and doubtless many others too, but at the same time it also betrays a certain negligence.
Originally it had been my intention to write this review as part of the same article as Attack with Black, but due to a lack of time I didn’t manage to read Kasparov’s work properly at an earlier stage. Still, I’ll take up the challenge, pointing out the resemblances and differences in both layout and content to give a more balanced picture of the latest publications in this field.
In consultation with the publisher New In Chess, the author decided to present the material via model games, something I regretted not seeing in Attack with Black. However, in covering 273(!) games within 316 pages, in my opinion Kasparov loses the advantage of presenting such exemplary study material and in quite a few cases the pages are quite unnecessarily filled with the final moves of a game.
I’m the last person to dare to challenge his evaluation of the position, but I find it quite annoying that about half a page has been wasted by the inclusion of the final moves of the game without suggesting any possible improvement and/or textual explanation as to how White should have converted his advantage instead. Why is he better at all? I can imagine many amateur players, for whom this work was written, would feel several questions still remained unanswered.
Having played countless games with this opening, the author decided to include many games of his own in the book. The first example is in the first chapter "The Fianchetto Bg2" which shows Kasparov taking a different course from Aveskulov by starting off with the main variation. Emphasising the importance of understanding the position rather than investigating novelties at move 25, Kasparov sums up key strategic ideas for both sides. The following game, played by one of the greatest experts in the Benkö Gambit, is quite instructive:

I found these explanations very typical of Kasparov’s style of writing and I’m sure many people will benefit from them. On the other hand, chess is a very concrete game and in many cases the author refrains from delving deeper into the position by analysing alternatives, especially in the earlier stages of the game. After all, it’s an opening book and I think the reader is hardly interested in possible improvements on move 30 which are just assessed with either an exclamation mark or evaluation symbol.

Throughout the book several travel experiences are shared with us. Having the privilege of travelling the world myself, I’m usually quite interested in others’ opinions, but to my taste this doesn’t fit well in a book about chess openings. About to introduce the Fianchetto Variation, Kasparov seizes the chance to get this off his chest:

I faced this variation for the first time in a tournament in Egypt. Yes, chess competitions are held there too. Only a year ago it was a rather safe country with lots of tourists. The Egyptian federation sensibly arranged two opens in succession: in the city of Tanta (situated in the Nile delta) and in Giza, the capital of the area where the famous pyramids are located. It was economic for both the participants and the organizers. Foreigners can just cross the Mediterranean by plane once. For the participants’ entertainment, the hospitable hosts organized daily excursion (see picture).

In the course of the book you’ll come across several other such tales. You’d almost forget Carlsen had this opening in his arsenal till only a few years ago…
In general I got the impression the author didn’t put as much labour into the book as the opening actually deserves. In the following example I failed to understand the point of the annotations:

I find the quality of analysis in this last example too superficial. After 17…Nxb2 it has been said that White has problems, but how come the game ends peacefully so quickly? Let’s look at a quote mentioned ten pages prior to the game.

However, I will repeat: if you don’t want problems, do not use the Benkö Gambit against players rated 2700 or above – at least not in tournaments with a classical time control.

Am I missing something here? It’s White who is on the verge of defeat, but why doesn’t Kasparov suggest an improvement when he rightly claims an advantage for Black?
I may sound a bit harsh in my statements, but I sincerely believe the author could have done better, even though I understand it’s not everyone’s wish to analyse so many games in depth. Perhaps he should have limited himself to 30 games, for example, leaving enough scope to work out the variations in detail.
As mentioned above, Kasparov describes strategic plans quite well. The Benkö Gambit with 5.b6, which he calls ‘The Languid Variation’, is covered over the course of 26 pages. Since the ensuing positions from this particular variation differ entirely from the main lines in the opening, it’s a good moment to take stock and consider possible ideas. I think I couldn’t give him a better compliment when I say that after reading the first page of the chapter I would feel well-armed combating a 2700 player!
What’s the use of the move b5-b6?
The main drawback of this variation is the fact that unlike in the basic lines (5.bxa6) White does not have an extra pawn. And, you see, this lack may outweigh all the positive factors.
Counterarguments for Black:
Quite surprisingly, the variation with 5.f3 has been christened the Sämisch Variation. Although the link with the variation against the King’s Indian is easily made, I’d never previously heard this name used for this specific move against the Benkö Gambit. What strikes me more is that he has a completely different opinion from Aveskulov as regards the critical test of White’s set-up. The ultra-sharp variation initiated with 5…e6 (“only suits players with strong nerves”) has been covered only in the space of two model games, while he expresses a clear preference for 5…axb5 6.e4 Qa5, a variation recommended by Aveskulov only from a practical point of view to avoid loads of theory.
Drawing conclusions after reading both books, I can only say there is almost no overlap. Both authors have their own style and view of the matter, and personally I’m more inclined to Aveskulov’s. It speaks in favour of Kasparov that he has massive experience in this opening and is willing to share his findings on paper. I dare say many of us are just jealous in that sense.